WE all need guidelines in life. An old pal and former Royal Navy Leading Seaman used to reminisce about his favourite port of Victoria Harbour in Hong Kong (pictured below).
"We just followed the sign for San Miguel on the waterfront," he told me (often), with a fond twinkle in his eye. Old salt Jack, who sadly passed away the other week (see Column and Poem pages), meant their night-time guideline when going ashore after they had anchored or docked at HMS Tamar in the harbour. 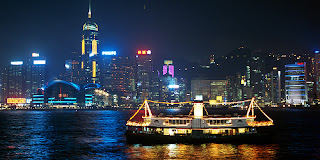 It just so happened that huge neon sign for local beer was by the South China Fleet Club, the crew's usual destination of choice.
My own guiding sign, when I lived in the now troubled former crown colony back in the '80s, wasn't far off Jack's mark - in distance anyway.
It was a Christain cross on a strange triangular, colonial building just as you emerged from Central District into busy and very 'local' Wanchai.
This was also the colourful waterfront area made famous in Richard Mason's inspirational romantic novel and William Holden and Nancy Kwan's worldwide hit film in the early '60s, 'The World Of Suzy Wong'. It was where sailors headed, for clubs and bars, but also full of good ethnic restaurants and, in my first years there, my shared flat on busy Hennessy Road.
That odd building, with its sign of spiritual hope and universal kindness, was the quirky Solders & Sailors Home, once a well-meaning colonial welfare institution but, by my time, a place for cheap meals, accommodation and quiet rest used mainly by local students and travellers.
I was drawn by its nearby accessibility and colonial menu, which included Sunday-type roast dinners. My hopes of rekindling some atmosphere of home life through such a dinner at the weekend were sadly  dashed (you can find out why in my memoir of newspaper and travel years, 'Only The Good News'), but it has since appeared in my novels (see also 'The Last Ghosts' and, most recently, 'The Lost Hero'). 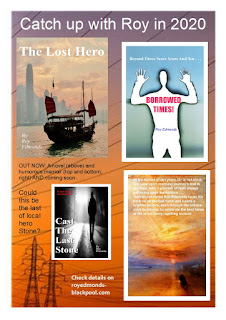 As we slowly begin to emerge from the Covid pandemic, this non-profit-making, light-literary website - started by retired journalists tired of all the bad news - hopes to be relaxing and inspirational too, while full of uplifting guidelines for life and a better future.
Readers from around the globe are invited to catch up with our latest efforts on the Chapter/Story page, or our Books, Poem or weekly updated Column/Memoir pages.
We hope you, too, find what you're looking for!

Roy: Good to see you keep batting away for the pleasant aspects of Blackpool. I even see one Charles Keighlley persists with his interest in old Bradford. When it has become a crime cesspit for emigrants from Kashmir, Lahore and Karachi. The future for for once-Christian England and UK is rather sad. The ongoing social demographics favour the Pakistanis, Bangladeshis and Indian Muslims.

Some 50 more years and every Midlands and Northern Borough Council will be Muslim and all MPs in those areas will be members of the Islamic Labour Party. Of course most of us reading this will be dead. But how did it come to this. Useful idiots in the diplomatic service and the Labour Party kept the changes moving ahead.

Keep drinking in the pleasant Saddle Room Roy and the future will pass quicker and you can hopefully go to a place where emigration has no role to play. Just picturesque grass tennis courts, the pleasant club bar and perennial beautiful sunsets. Almost like Ilkley. Anglican heaven.