'A FISHERMAN lives here - with the best catch of his life.' So said the notice in a harbour inn's tiny window, writes Roy Edmonds.

Its walls were of thick, whitewashed stone and as we passed there was a glimpse inside of polished brasses, time-worn settles and a cosy open fire.
The homely humour and inviting scene made you glad to be alive, as did that invigorating, briny air beside a short jetty. We were in Cornwall, at one of many fishing ports nestling in tiny coves cut out of a rugged coastline over centuries by the mighty Atlantic and its winds. 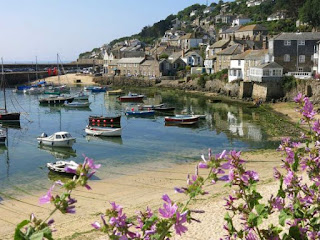 But, on this early summer's day, the sea was still, a glistening turquoise with gently bobbing boats, watched over by eager gulls, their cackles excited by the morning's catch.
The lanes of such ancient villages are narrow and twisting, to escape those winds; all too cramped for modern traffic from which we took refuge in quaint cottages, savouring the famed local pastie, or crab sandwiches, cream tea or Cornish ale.
One benefit of coach travel is that you don't have to drive. At times you might rather be free from the company of 40 or so others, but on motorways you can doze or read and the drivers have a good line of humour too.
"See this old graveyard we're passing," said Shearing's Phil as we drove back to our Newquay hotel through hillside villages, "the man who invented the postage stamp is buried here."
After suitable 'oos' and 'ahs' from the mostly elderly passengers, he added with perfect comic timing, "They stuck him in the top, right-hand corner."
The coach drive was for me a trip back into the past - to childhood memories unexpectedly triggered in the famous surfing resort. I shall soon be rekindling those, as well as our recent holiday's other highlights, on our Memoir page (see top of right column).
She Who Knows had last visited the area a couple of decades ago and introduced me to delightful cafe-bars overlooking the town's old harbour; its grand Victorian hotels that I could only wonder at as a child and, a joy which I relived with her, horse riding through the picturesque Gannel Estuary. 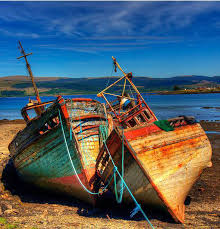 Why do we love the seaside? Living here on the Irish Sea coast of Lancashire we often take if for granted, until a westerly wind carries its ozone laden air and lifts suburban spirits. Then there's that occasional glimpse when calm and glittering in sunshine, horizon fading into blue skies . . .
Perhaps at the edge of land and sea it reminds us of life's journey and those vast, unknown wonders of eternity; awakening something long incumbent in our souls.
But, then, as the tills of amusement arcades ring out and sea-bird cries mock such earthbound follies, we realise we're being fanciful. As everywhere, the sea and coast have many faces. That passing joy we felt came from within ourselves.
We also hope to lift your spirits and stir similar delight in life on this light literary website. There is much to read on accompanying pages, all updated from time to time. Books available on Kindle or paperback, sponsored by the British Arts Council, help support this non-profit making enterprise.
Enjoy it at your leisure and get in touch in return, wherever you are in the world.
May your catch, too, be plentiful.