HERE on the Fylde coast of Lancashire there is a lull after severe Irish Sea gales.
At Edmonds Towers, in Great Marton, there is also calm as the New Year at last stretches into life.
We marked its start (well, almost) with steak and champagne at home before retiring in advance of fireworks outside.
To someone born in 1949, the year 2014 sounds very advanced. 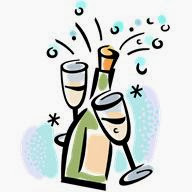 However, much of the world is still at war with itself - and mankind causing even more mayhem than natural disaster. It also looks increasingly unlikely Blackpool Football Club will ever win another match.
Still, as I learned when an idealistic journalist,  I can't change any of that. Most of us may only engage those around us and it's best to take each day as it comes.

So, what about New Year Resolutions?
Well, we all know what we ought to do. However, few of us fully understand ourselves, let alone what life is all about.
How much better to simply embrace Nature's grace, while also accepting her rules.
If you wish to sparkle in 2014, my advice is to open your mind - but then follow your heart.
That wise adventurer Rudyard Kipling brings inspiration (see our Poem side-page).
For further thoughts - plus thrills, mystery and romance - turn to Books.
Many also enjoyed our Christmas short story - still on the Chapter page but to be replaced soon.
Readers throughout the world visit us and it's an honour to share with them memories of distant places on our Memoir page.

Often we have more readers from the U.S.A. than our native Britain; other times more from China, while Eastern Europe also provides a loyal following. Newer interest has now come from the Middle East and South America.
It's a small world and a close one, as we realise we're all so similar . . .

So let's enjoy it!