BEING a published author proves to be an emotional roller-coaster.

As readers should know, my first novel on kindle appeared before Christmas.
To say sales remained steady into the New Year would be an understatement. Or, to use another, sales were 'quiet'.
Since then I have published another novel, again on kindle and in paperback, and a booklet about my local pub here in Great Marton on Lancashire's blustery Fylde coast.
Following closely upon the publication of Saddle Up! - an affectionate history of Blackpool's oldest inn - there came an impromptu book signing inside the said Saddle Inn. 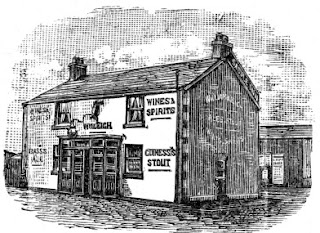 Well, it was a jolly affair with barmaid the lovely Lou buying a copy and even one of the curmudgeons from the Commons room, known for his careful approach to spending money. There was such a flow of purchasers, pints of real ales and repartee that I was soon out of books and late for dinner.
Back at Edmonds Towers, She Who Knows was forgiving and impressed.
"Well," she concluded with businesslike sagacity, "you'll have to order more copies, won't you?"
These are currently in the post to Great Marton from the Arts Council publisher FeedARead.com (where copies can be ordered, by the way).
It was a thrill being the centre of such warm attention on a chilly February afternoon and I hope, with the landord's blessing, to repeat the occasion on a more organised basis.
Anyway, in the meantime, there was staggering progress on the internet - as ever a source for wonderment, such as finding I had hundreds of website readers in the Ukraine.
From the Amazon website I learned that sales of my first book Where Angels Tread had soared to 860!
Yes, heady stuff! It was time to break out the champagne here at the Towers.
"Marvelous!" Agreed She Who, wisely adding: "Have you checked what royalties you'll receive?"
I hadn't.
A quick check revealed an equally staggering sum . . . of just US$7.
Yes, that's right, I'm not missing out any zeros.
Then I remembered signing up in desperation for a free-copies promotion with kindle to boost interest in my books. Apparently 99% of sales had occurred then.
Consequently, the champagne is back on hold, along with my glee at coming late to fame and fortune.
In the meantime, you can find out the latest on my Books page; or start reading a new short story or finish off our previous one on our Serial pages, while another well-travelled memoir will appear soon in our memoir section, People & Places.
So, dear friends, mine's still a small bitter.
Cheers!

I believe it is only a matter of time before financial rewards come your way. Incidentally, I had a drink with extremely occasional FT correspondent Bill Barnes in Bangkok last week. I paid the bar bill and it was staggering. But then I was on company editorial business.

Hello Roy - and greetings from Edinburgh! Just wanted to let you know how much Val and I enjoyed Where Angels Tread. Such a clever and touching story full of atmosphere and wonderful characters, not least your principal,Jeffrey Love. A good man if ever there was one. And how I would have loved > to sample a pint with you in The Angel, with all its enchanting history and
tradition. Cheers!